Jean Honoré Fragonard was born in Grasse on April 5, 1732, and began working as an apprentice in the studio of Jean Baptiste Chardin in 1746. From 1748 he studied with François Boucher and in 1752 won the Prix de Rome. Four years later, after preparing at the École des Élèves Protégés in Paris, Fragonard left for Rome, remaining there until 1761. Though his professors were not particularly taken by his work, the young man traveled around the country making romantic drawings of gardens and the Italian countryside that served as the basis of successful paintings on his return to France: pastoral depictions of imaginary landscapes with equally imaginary inhabitants. With the submission of a serious historical work, Fragonard was admitted to the Royal Academy, in 1765. He married Marie-Anne Gérard, a painter of miniatures, on 17 June 1769, and had a daughter, Rosalie, who became one of his favorite models.

Though the Rococo style was becoming old-fashioned, this most prolific of artists continued to paint lighthearted pieces for wealthy patrons, and in 1773 made a year-long trip to Italy, from which derive several magnificent landscapes in the two years following. Fragonard's paintings became more intimate thereafter, and then rather limited after 1784. Though losing aristocratic patrons, Fragonard adjusted to the 1789 Revolution, and from 1794 helped to create and administer the new National Museum, a post from which he was dismissed in 1799. He was given a state pension in 1805, but died in Paris on Aug. 22, 1806 in relative obscurity, largely forgotten until the biographies of the Goncourt brothers and the birth of Impressionism. 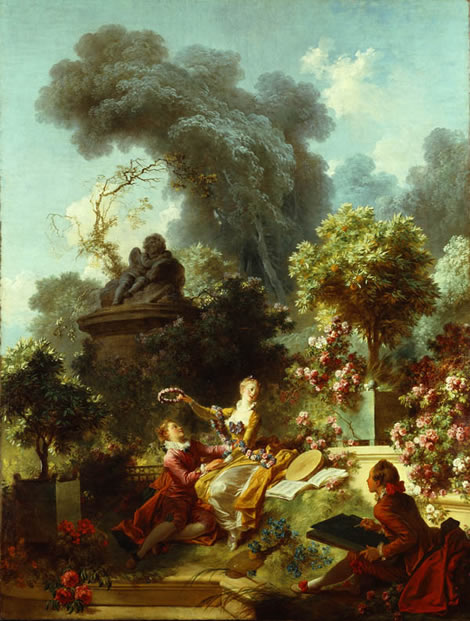 The Rococo style in painting, established in France early in the century by Antoine Watteau, was sensuous and accomplished, appealing to the sophisticated taste of aristocratic patrons. A great deal of skill went into its luminous colors, complex surfaces, refined textural contrasts, free brushwork, and asymmetrical compositions based upon the interplay of curved lines and masses. Often depicted was the game of love treated in a playful manner, and Fragonard indeed took the 'fête galante' in new directions. Where Watteau was reserved and melancholy, Fragonard was playful, even frivolous, depicting unreal situations in unreal settings.

No one could call 'The Lover Crowned' an honest depiction of France at the time, or indeed any time. Sunlight bathes a garden which luxuriates in roses and other flowers. A statue stands guardian, or rather sleeps, and over the scene tower masses of trees as insubstantial as summer clouds. A young woman, elaborately dressed, and decorated with yet more flowers, is about to crown a young man as the winner of her affections. A lute and open book of music lies at her side, and another young man is drawing her portrait. Young man? Neither seem more than boys done up in pantomime costumes, though undeniably costly ones.

Paintings so close to 'chocolate box styles' are not easy to appreciate today, and Fragonard certainly did not appeal to the social conscience of revolutionary France, nor to the new mercantile spirit of the Second Empire. Even the contemporary Denis Diderot charged the artist with frivolity and asked him to show 'a little more self-respect.' Yes, we can note Fragonard's legendary facility, the delicate brushwork, the glowing colors, the silvery tonality of atmosphere, and the exuberant gaiety of mood, but aren't the accomplishments now as passé as the fripperies of last season's fashions?

The answer, I think, is that we have to see paintings, and indeed all works of art, in the context of their own time and conventions. England was governed through taxes by Parliament, but the aristocracy of France were kept from mischief by compulsory attendance at court. With money and position, but no real power, many in the 'ancien régime' passed their time in lighthearted entertainment, where living was made an art form (as it still is among the French upper classes). Fragonard was popular in the early 1770s, most importantly with the Comtesse du Barry, Louis XV's mistress, who commissioned several decorative pieces for Louveciennes, her château near Paris. The most famous were a set of four panels entitled 'Storming the Citadel, The Pursuit, The Declaration of Love', and 'The Lover Crowned'. Unfortunately for Fragonard, but to the benefit of the Frick Collection, the pieces were rejected and replaced by the work of Joseph-Marie Vien, who painted in a more neoclassical style.

As did Boucher, Fragonard kept his colors on the acid side. Every conceivable area of 'The Lover Crowned' is crowded with detail, but that detail is not cloying because it is organized and made subservient to the overall theme. The three figures form a triangle, and that triangle is repeated in the shaded masses of the foliage and statue, and again in the foaming mass of trees that half frame the light clouds. The young woman's head is accentuated by a dark background. The same device, in reverse, is used to accentuate the portrait artist and the statue beyond. These strong diagonals that lead the eye towards the top left corner of the painting are balanced by equally strong diagonals to the top right corner. The garden seems a tumbling mass of trees, shrubs, flowers and figures where the contrasts (try half closing your eyes) make an ever lively balance of shapes. Fragonard painted quickly, but had an excellent, seeming artless sense of composition. Most artists plan their compositions carefully, but in Fragonard the gift seems innate, as though he made up these vibrant shapes and masses as he went along, which indeed he may have done, though he also called on extensive drawings made during his Italian journeys.

The work is generally dated to the early 1760s and shows the influence of Tiepolo in its palette, though not its theme. The piece, which entered the Louvre in 1869, when Fragonard's accomplishments were being reassessed and recognized, reflects the eighteenth century taste for the picturesque — a style that even now (though often debased) is still popular with visitors to Italy. Fragonard's colors are softer and warmer than in the piece above, and there are pleasing atmospheric effects that give a staged sense of depth. Details are also more closely harmonized within the composition: the light tan color of the washing is repeated in the foliage opposite, the stonework and in the capstone to the bridge. The red in the shirt of the figure staring at the water is only the end of a series of rich, dusky browns and milky pink-orange colors that contrast with the bluish greens of the foliage. The little blue seen in the sky is muted, and seems the continuation of the spray-filled gorge seen through the bridge.

The composition is based on repeated oblongs and arches — the last in the bridge itself and the rounded entrances in buildings left and right. A key element is the disposition of light and shade, with shadowed bridge juxtaposed between sunlight areas in the foreground and the muted sky and background. No area is one unbroken tone, however. The background shows the falls higher in tone than the sky. The middle ground shade is broken by the bridge capstone, the foliage catching the sun on the left and by figures on the right sitting on or working in front of building with dark interiors. The foreground has high contrasts in the workmen's tools and laundry left out to dry.

Fragonard turned to more serious styles of Neoclassicism in the 1770s and 1780s, and this piece, though hardly the ennobling scene expected of Neoclassicism, is restrained and simple in composition, with detail lost into the interior shadow of the room. The line is cleaner and the palette more restricted: mainly yellow through to red, all muted, these contrasting with an olive green in the scarf and an olive tinge to the dress. Both scarf and dress are treated in great detail, and are what captures the eye — a diagonal thrust of shimmering fabric between the door uprights, which are buttressed by curtain and half-seen lover on one side and the glimpse on an interior on the other. The lover's face and the woman's eyes turn right, directing us to the central darkness of the painting. It's an unsettling piece whose composition echoes the snatched display of affection (if such it is: critics disagree).

4. 'Jean-Honoré Fragonard (1732–1806)'. Metropolitan Museum of Art. Biography and notes on his painting styles.

8. 'Fragonard in the Universe of Painting' by Dore Ashton. Smithsonian Inst Press. 1988.

Jean-Honoré Fragonard, "The Progress of Love"

Beneath the Painted Surface: Fragonard's Fountain of Love