Henri Matisse was born on December 31, 1869, in the small industrial town of Bohain-en-Vermandois in northern France. He worked as a legal clerk, studied for a law degree in Paris, returned to a law office in the town of Saint-Quentin, and began taking a drawing class.

At twenty-one, Matisse started to paint seriously, attending schools in Paris, learning in the approved manner but also coming under the influence of the Impressionists, Cézanne and van Gogh. He exhibited in Paris, and began the travels that would be important to him, initially to London and Corsica. In 1898 he married Amélie Parayre, with whom he brought up three children, one of them born to his model Caroline Joblau. By the turn of the century Matisse was adopting the Pointillist style of Seurat and Signac, and submitting work to the Salon des Indépendants. Ambroise Vollard gave him his first one-man exhibition in 1904, and within two years Matisse was developing the style called 'fauves', or 'wild beasts' — strong, sinuous brushstrokes in bold colors, which aimed at emotional power more than verisimilitude.

The bright colors and bold simplifications helped Matisse forge a style that became recognizable, and then famous among collectors. He was able to travel to Italy, Germany, Spain and north Africa for inspiration, and his saturated colors, flattened pictorial space, limited detail and strong outlines became as important to modern painting as were Picasso and the cubists. Matisse continued with sculpture, and turned to printmaking, book illustration and murals. He was often bed-ridden after surgery in 1941, but continued working just the same, particularly with paper cutouts and wall-sized paintings. One of his last commissions was decoration of the Chapel of the Rosary in Vence (1948-51), a town near Nice, where he designed stained-glass windows, murals, furnishings, and the sacred vestments for the church’s priests. Matisse died at the age of 84 on November 3, 1954. 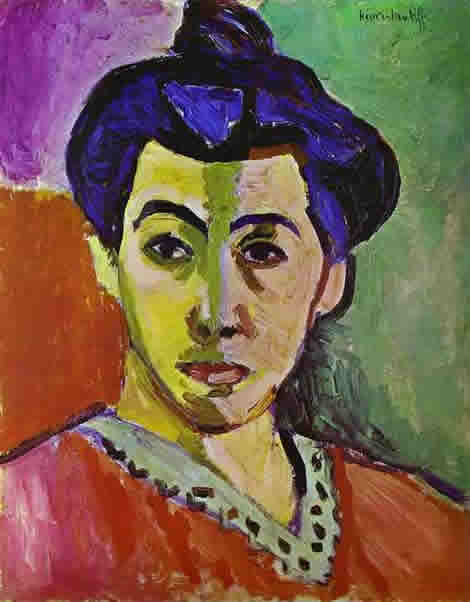 In this iconic, indeed famous work, Matisse painted a portrait of his wife with the two halves of her face in different colors, one approximating to flesh tones and other in yellowish greens. A green stripe separates the two halves. Much has been written on this work, rightly seen as the opening salvo in the battle for modern art, and much is clearly untrue, e.g. "The Green Stripe is an embodiment of everything that Matisse himself and the Fauve movement stood for: the lyrical use of color to create 'an art of balance, purity, and serenity.'" Similarly, statements like 'His mastery of the expressive language of color and drawing, displayed in a body of work spanning over a half-century, won him recognition as a leading figure in modern art' also need to be seen in context.

Certainly colors are being used for emotional effect, but 'the green for jealousy' is an argument for naivety: painters had developed a much more effective vocabulary by traditional means of representation. There is some balance in the work but there is no 'purity' or 'serenity'. The drawing is crude, and the colors are brash. The muddle in the center right has not been resolved: some heavy use of black was needed to continue the strong outline, but the muddy green of the background is most charitably called an improvisation, as are the other four panels when examined in detail, the purple, red and green of the background and the red dress. They are not attractive in themselves, and do not interact with any subtlety. 'Fauves', or 'wild beasts' was an apt term for work that intended painting to start on new foundations 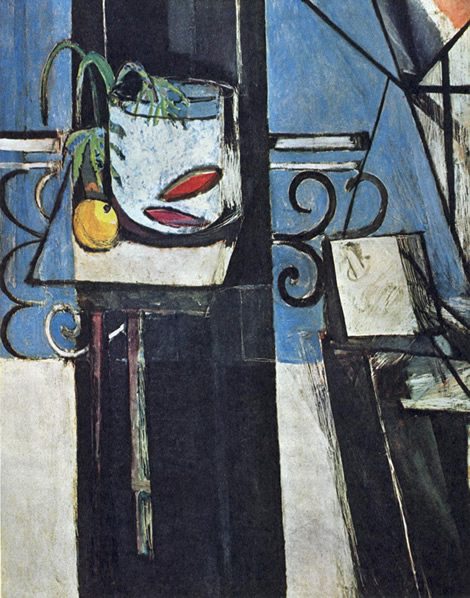 There are several goldfish paintings of the period, but this work is Matisse's answer to cubism, adopting its manner of presentation but not the analysis of nature into arbitrary planes. The panels are flat and thinly painted in blue, white and black. The lemon, goldfish and unexplained patch of orange in the top right break the rather somber effect, the first two adding resting points to the overall dynamism of the composition. Again, with its bold simplifications and absence of the third dimension, the painting is a strong statement about new directions, but little more can be said about the painting per se: it is not technically accomplished and has limited aesthetic appeal. 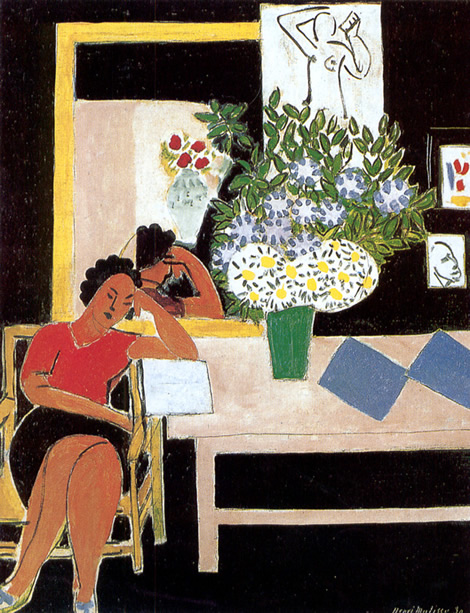 Matisse developed his own vocabulary of much-repeated objects, and here we have a woman seated beside a pinkish table on which is a large bowl of flowers summarily sketched in. The square shape of the chair is repeated in the table legs and a yellow frame to the mirror in the top left. The woman wears a red top and black skirt. Her features are simplified, and flesh is painted a warm skin tone throughout. Floor and walls are painted black. The objects are simplified and painted as flat panels, anticipating the cutouts that would feature in Matisse's late work.

Three points need to be made about Matisse. Firstly, the simplicity of the painting was a conscious choice by the artist. His earlier work, of the 1899-1902 period, does reveal a sensitive colorist perfectly capable of producing art on the leading edge of pointillism etc., perhaps art similar to Braque's Landscape at La Ciotat. The crude outlines, stereotyped images and dissonant colors that became Braque's trademark are not entirely explained by such stated aims as: 'What I dream of is an art of balance, of purity and serenity, devoid of troubling or depressing subject matter, an art which could be for every mental worker, for the businessman as well as the man of letters, for example, a soothing, calming influence on the mind, something like a good armchair which provides relaxation from physical fatigue.'

Secondly, the work anticipated many twentieth-century art movements, and is an indispensable ingredient of the modern world in architecture, advertising and industrial design where strong statements have to be made with great economy of means: there isn't the time (or money) for labor-intensive displays of technical skill.

Thirdly, such seemingly artless work needs a buttressing of theory to protect it from 'this isn't art', 'my child could do better', etc. remarks. Contemporary art indeed maintains an army of critics that stress the novelty and intellectual conceptions of an artwork, plus a network of dealers and museum to ensure purchases maintain their value. Matisse, though very far from bohemian, was an active member of the Parisian art scene, with Picasso, the Steins, Braque, Derain, Jacob and Apollinaire, for example, and the 1948 Plum Blossoms painting was purchased by the Museum of Modern Art in 2005 for an estimated US $25 million.

1. Henri Matisee. Biography.com. Biography and summary of his achievements.

3. Henri Matisse. Wikipedia. Detailed article, with a good selection of his work.

5. Matisse: The Fabric of Dreams – His Art and His Textiles by Jennifer Sachs Samet. Metropolitan Museum of Art, New York. Exhibition brochure.