Jan van Eyck was the foremost north European painter of his time, producing works of matchless finish and innovation. 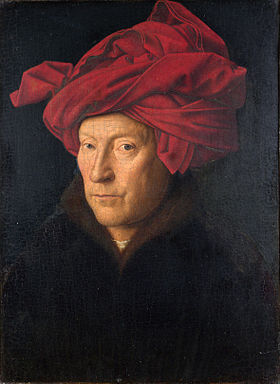 He was born around 1390, probably in Maaseik, and first served John of Bavaria-Straubing, the ruler of Holland, Hainault and Zeeland. On that patron's death he moved to Bruges and became a senior member of the Tournai painters' guild, joining such leading artists as Robert Campin and Rogier van der Weyden. In 1425, van Eyck was appointed to the court of Philip the Good, the ruler of Burgundy, the wealthiest sovereign in Europe and a lavish patron of the arts. Van Eyck was an intelligent, educated and traveled man, who undertook many diplomatic missions for his patron, and was paid well for doing so. His output was small — only some 23 paintings are considered to be by van Eyck alone — but his influence was enormous. His approach was much copied and studied, particularly its revolutionary handling of oil paint. Van Eyck married the much younger Margaret around 1432 and bought a home in Bruges. Records suggest that he was held in high esteem by the upper ranks of Burgundian nobility and accepted many foreign commissions. He died in July 1441, leaving behind many works to be completed by journeymen. 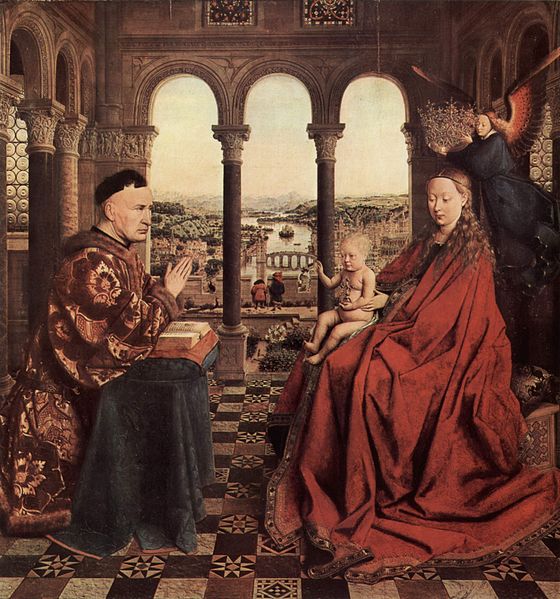 As Jan van Eyck's work is well covered by books and Internet articles, we shall here concentrate on his technique. Van Eyck is not now regarded as the inventor of oil painting but he did bring to perfection a technique that has kept his paintings glowing with jewel-like brilliance to the present, often with little or no restoration work. The start was wood panels, which were usually cut radially from the tree trunk (i.e. like a slice of cake) and carefully assembled, front and back, with simple mortise and tenon joins. The joins were then pegged with short wooden dowels. Panel surfaces and frame moldings were both coated with a chalk and glue ground in preparation for painting. Then came a detailed underdrawing applied with brush and a liquid medium, this drawing being exceptionally detailed in key areas like facial features but a little broader elsewhere. Van Eyck would modify these broader areas a little as the painting progressed, and also make small corrections to facial features etc. if the work required it. When painting subjects with whom he had only limited contact, van Eyck seems to have made very elaborate drawings, complete with notes on the color.

Areas were then built up in several layers: the red in the Madonna's dress being a thin layer of the largely opaque red pigment vermilion bound in a heat-bodied (gently-heated) linseed oil " red glaze" which was applied over a thin layer of bone black and lead white to model folds. The vermilion was largely kermes from the scale insect, Kermes vermilio Planchon, but some cheaper madder from the plant Rubia tinctorum was probably also added. Shadows were darkened by a little bone black and some natural ultramarine. So was built up the painting, section by section, much as Carravagio probably did, but with an almost hypersensitive attention to detail.

Though van Eyck aimed at a photographic exactness, he did not hesitate to make small distortions if the result was more lifelike. In the portrait of his wife, for example, he added a red line between the lips, made the pupils of unequal size, and skewed the nose more in profile than the pose warrants: the rather forbidding Margaret was clearly not a woman to be trifled with. 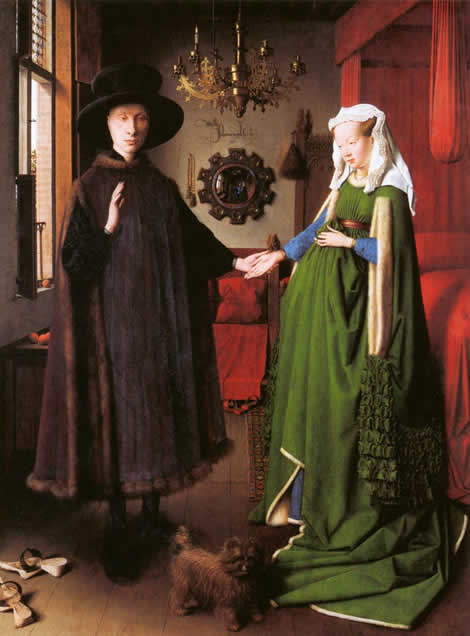 Van Eyck's paintings belong to the northern European tradition: the figures are posed, closely observed and uncomfortable in this world of sin and moral degradation. The wealth and social status of the sitters is emphasized with enormously expensive clothes in the latest fashions, but the facial features are in no way flattering. The Madonna with Chancellor Rolin is almost monochromatic in red, and the extraordinary degree of detail in the tiles, the architecture, the Chancellor's rich clothes, and the crown being carried to the Madonna gives not so much a suffocating air as one intensely serious, as would be expected of this most powerful man's adoration of the Virgin. She seems lost in contemplation; the Christ child is performing a solemn duty; the Chancellor seems more to be adjudicating than acquiescing to a higher power.

That same serious is seen in the Arnolfini portrait, where the two figures seem monumentally still, as though the betrothal (if such it is) were an annunciation of their joint lives together. (The subject is still thought to depict a wealthy Italian cloth merchant, but now Giovanni di Arrigo or his cousin, Giovanni di Nicolao Arnolfini.) She has placed a hand across her waist (not a sign of pregnancy: it is contemporary style of dress) and holds out her other hand submissively to her husband's simple clasp. There is no fervor in the expressions, and he indeed seems to be giving a solemn benediction to the ceremony. The terrier dog, the chandelier and mirror are marvels of close observation, but neither they nor the scattered shoes add any informality: they are there for compositional reasons. The dog repeats the handclasp and is likewise balanced by the light-painted shoes and the white border of her dress. The vertical window and his upraised right hand are matched by her white sleeve. The color is again carefully orchestrated, but is here triadic, though red predominates.

The perspective of the floor tiles gives depth to the first painting, but space in the Arnolfini portrait is largely accomplished by shadows and tone control: an extraordinary achievement made possible by glazes.

Scholars have read various messages in the details, and probably correctly: the Middle Ages rarely accepted the natural world as it was but added improving tags and homilies. The inscription, the lighted candle and domestic items depicted in the Arnolfini portrait may be the pictorial equivalent of a wedding contract. The mirror has figures depicting incidents in Christ's life, the woman's white cap may denote purity, and the dog perhaps refer to marital fidelity.

The view in the first painting is probably an imaginative view of Autun in Burgundy, Rolin's birthplace. As in the Arnolfini portrait, there are reminders of man's place on earth in small illustrations scattered about Rolin's side of the painting, here referring to the seven deadly sins.

11. 'Applying the Paint and the Technique of Color Modeling'. Color Vision and Art. Explores egg tempera and glazes.

12. 'Painting in Oil in the Low Countries and Its Spread to Southern Europe'. Metropolitan Museum of Art. Slide show and commentary.

13. 'Early Netherlandish Painting at the Crossroads: A Critical Look at Current Methodologies' by Maryan Wynn Ainsworth. Metropolitan Museum of Art, 2002.

Van Eyck, Portrait of Giovanni Arnolfini and his Wife, 1434