William Orpen was born in Stillorgan, County Dublin in 1878, studied in Dublin and at the Slade in London and by superb drawing skills, spirited brushwork and immense industry became the most celebrated of Edwardian portrait painters. He married Grace Knewstub in 1901, with whom he had three daughters, but the marriage was not happy. Orpen kept a French mistress, had affairs with models, and eventually took up with a wealthy American heiress and society hostess, Mrs. T. Saint-George, her flamboyance and height giving rise to the sobriquet 'Jack and the beanstalk' when the couple appeared together in London. Like Sir John Lavery, Orpen became an official war painter of World War I, and in 1917 toured the Western Front. Much of the work before and after the war was bread-and-butter portraiture of London society — judges, generals, landowners, politicians and theatre people — but Orpen could also produce clear-eyed, incisive work of privates, dead soldiers, German prisoners of war and scenes of his native Ireland. His large paintings of the Versailles Peace Conference pulled no punches, capturing the impressive setting but also the political wrangling and posturing of the class whom he came to dislike but nonetheless relied on for commissions. Orpen became extremely wealthy (earning £54,000 in 1929 alone), was made a Knight Commander of the Order of the British Empire (KBE) for his war paintings, and died in 1931 at the age of 53, the result of continuing poor health and alcoholism. 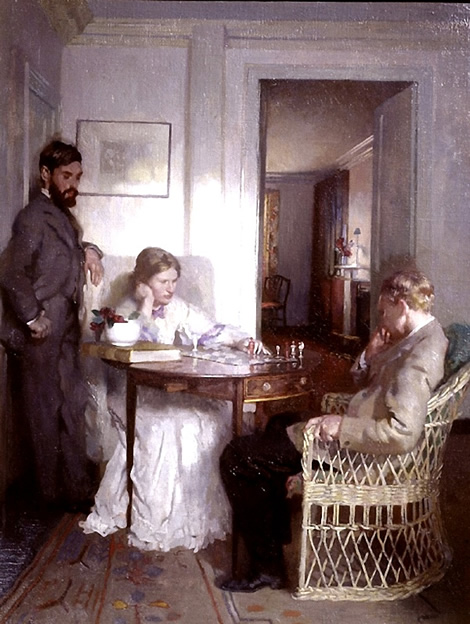 William Orpen was an exceptional student, not only gifted but markedly intelligent, learning rapidly from a succession of celebrated tutors and carrying off whatever prizes were going. In this early work, painted at the astonishingly early age of 22, Orpen has created what seems an unposed study of three people absorbed in a game of chess. The color scheme is the simplest: the muted browns, grays and yellows have something of the tonal values of seventeenth-century painting but are entirely contemporary: the mahogany of the table has a resinous sheen and the bleached cane of the chair has an acid touch. Space is created by shadows, and the spectator is led into the painting from the far bottom right to the far left and then into the interior of the back room by a folded screen of darker tones: the shadow behind the seated figure, his dark trousers, the dark table leg, the standing figure and the dark objects in the room beyond. To this is added receding diagonals of the carpet, the open door and the features of the room beyond. The window light from viewer's far left picks out details of the cane chair, the young man's hair and jacket, the woman's dress and lights the wall behind her, breaking what would otherwise be a gloomy interior and illuminating her concentration as though she were a transfigured saint. It also makes a focal center to the painting, being equidistant from three areas of shade: the young man's trousers, the standing figure and the darkness of the room beyond. Behind the casual arrangement is a great deal of the painter's art in composition, and the repeated verticals heighten the players' concentration. The paint is handled cleanly, the figures' gestures look natural, and there is a pleasing balance between closely observed details (the cane chair, the chess pieces, bowl of flowers and room beyond) and the plainness of the surrounding walls. 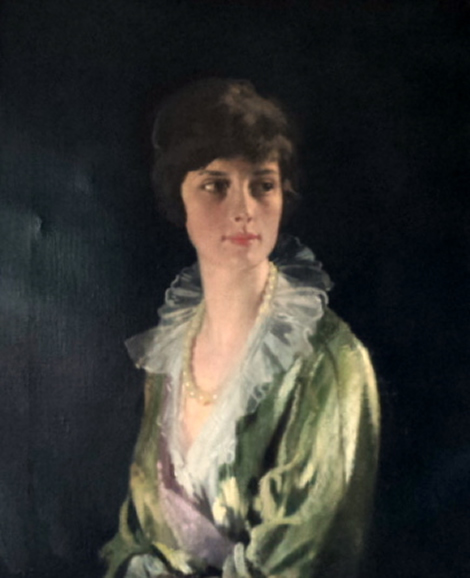 William Orpen, the last of the great society painters, was particularly drawn to actresses and society women, often accentuating their glamour by placing them in dark settings. He grew up in the Parnell era of Ireland, and its tensions created some of the ambiguity in his work: cultural sympathy with Ireland, political loyalty to Britain, and an occasional need to strictly tell the truth. His gift for achieving a likeness allowed him to paint what he saw, and when that view was dullness, as it was with many Edwardian worthies, the portraits were shallow and conventional, giving the sitters only what they had paid for. He did have an instinctive feeling for character, however, adding warmth and sentiment to sitters he empathized with, be they society beauties as in the portrait above, or the common serving men who suffered greatly during the war.

In his portrait of Lily Carstairs, which formed part of the Royal Academy Exhibition of 1915, Orpen lit the figure from two sides, an arrangement which gives luminosity and a certain ethereal appearance to an accurate depiction. The dress is created with a series of soft swirls of satin fabric, which make her appear more flat-chested than in fact she was. The bodice fans outward and seems to prepare us for an exceptionally pleasing portrait of young womanhood: uncommon good looks but also spirit, intelligence and a warm heart. There are dark shadows to the eyes, and strength of character is suggested by dark tucks to the full mouth.

Orpen's sometimes uncompromising realism came out with his scenes from Ireland, and more so from the western front, where their queues of gas-blinded tommies added to the emotional exhaustion in his postwar portraits, which were 'done with mechanical efficiency, and without pause for reflection, save when he scrutinised himself and found a face he could no longer understand. his face... grimaces, it squints, it scowls'. {5} 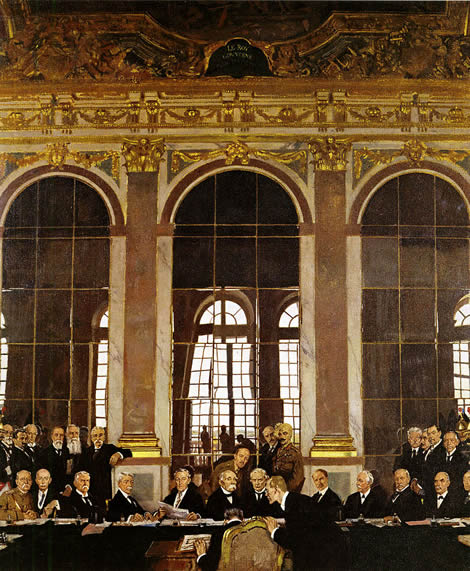 The Treaty of Versailles 1919. Oil on Canvas. Private Collection

Orpen's paintings of the Treaty of Versailles, which followed the first world war, and created many of the injustices that led to the second, are striking social comment. Through earlier, individual sittings, the participants are exactly depicted — Woodrow Wilson, Clemenceau and Lloyd George can be immediately identified in the group center — but all are dwarfed by the glittering setting in the Hall of Mirrors. To the elaborate and gold-painted ornament that towers into darkness above the sitters is added the mirror reflections, whose distortions seem to suggest how fragile are the deliberations of its politicians and statesmen — deliberations that marked the end of the old European regime and the start of the modern but bloodstained world in which we now live.

The painting achieves its ends by a restricted palette. Except when military men, the figures are dressed in black morning suits. White appears in their starched shirt fronts, the papers and the blank window reflections. The network of mirror panels evokes a cage, suggesting that the participants are as much prisoners of circumstance as are the war-weary masses waiting outside for a just and lasting settlement. Whatever richness the painting possesses in its warm browns and gold is reserved for the setting: the porphyry and gold columns and the wealth of ornament above.

2. 'Orpen, Mirror to an Age' by Bruce Arnold. Jonathan Cape 1982. An attractively-illustrated biography.